I was supposed to run the Trade In today wreck fishing for tog, but we could not snag a third man so we had to bag it.  Instead I hopped on for a ride with a friend of mine (Keith) on his Viking to go chunking for stripers in the DE Bay.  The air was crisp and calm at 6:30 am as we made our way out the Cape May Canal with Wednesday’s lingering Full Moon.  This was my first chunking trip of the season which was weird for me to think since usually that is what I spend the majority of my November doing.  We got setup with a hard incoming tide not far from the Canal, and the water was dirty and our lines would come up covered with grass.  We quickly moved to a different spot about 2 miles away and had the same issues, but managed to snag a keeper bass out of there.

At 9:45 am the tide slowed down and we decided to move out towards the middle of the bay into cleaner water.  After looking around we finally found some solid bait and bass marks on the sounder.  We had to wait for the tide to get moving and it was about 40 minutes when we got our first bite.  We managed to go 2/5 at this location.  Today was the day of mechanical failures with tackle.  We had some freshly spooled reels that turned out to have a bad batch of braided line on them as they kept popping at random places in the line.  I have never had this happen before, but it happened on all of them so it was safe to make the conclusion that the braid was bad.  We also had a few reels just seize and/or break on us as well.  It go to the point where all we could do was laugh since it was becoming so rediculous and unexpected.

We had not had a bite in about 45 minutes and decided to pickup and look around.  We searched through 3 different places before we stopped and setup for our last hoorah.  As the outgoing tide slowed, we started getting some action and finished off the outgoing tide 3/6 on keeper stripers.  At the end of the tide we had a water temperature of 46 degrees.  The stripers made us work hard for them today, but we were able to pick at them randomly throughout the day and put together a decent catch.  Couldn’t have asked for better weather, and I had a blast fishing with a fun group of guys! 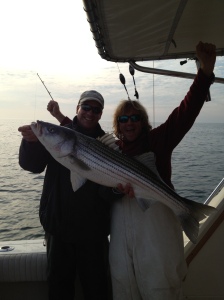