So it is that time of the season and everything has been crazy busy. I haven’t had a chance to post any reports so here it is.
Mid last week – mated on boss Lady and fished the Hot Dog area and caught bluefin tuna
Stone Harbor Invitational Marlin Tournament – Captained Fin Addict
Sat: fished 1000 fathoms of the poormans and caught some dolphin and went 2/3 on white marlin
Sun: fished 500 fathoms on south poormans canyon and were 1/4 on whites in first 2 hours but the severe thunderstorms pushed us out of the area and inside. The weather never let us back in where the fish were.

Fished on Trade In for an overnighter Monday into Tuesday: overall we caught 3 makos, 1 40# yellowfin tuna, 20# bull dolphin, and a bunch of golden tilefish. Overnight bite was lacking and there were so many sharks out there. We caught a hammerhead and a tiger shark in the dark as well. The water was there on Monday but pushed out of there Tuesday.

Today: I am heading out on the boss Lady towards the Elephant trunk as i type looking for tuna. Gonna get in a nap since I am mating today, kinda nice. Hopefully I will get today’s report posted up at the end of the day. 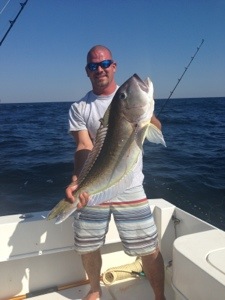