Went out on the Trade In again looking for sharks on very light line.  It turned out to be an interesting day.  We were headed towards the general area just above the Elephant Trunk.  We hit the break from Green 64.5 degree to Blue-Green 67.2 degree water.  We setup on the drift here and had absolutely no drift because it was so calm, s we trolled a bit but didn’t see much except for a free jumping Mako.  Since it was slow inside and flat calm, we decided to run out to the Wilmington so we could tilefish while we were shark fishing.

We spent the afternoon picking at tilefish and we caught and released 2 blue sharks, one of which was tagged, and we were able to manage grabbing the tag before the release.  We had a lot of life in the 70.2 degree blue water and towards the end of our day I started marking at least what I thought was tuna under the boat.  We tried jigging but never could get a bite.  While we were cleaning up we saw the yellowfin tuna come up under the boat and start jumping out of the water, it was wild.  Unfortunately all we had was mackerel and they wouldn’t take a piece of it.  As they disappeared, we had a huge school of small mahi show up and we were able to get them to take a hook.  We spent about 20 minutes catching one after another until we had our fill.  Pretty good trip with the crazy action at the end of the day. 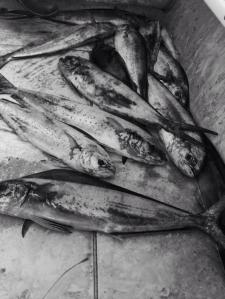