Today was our last day with Jeff and Sid. Ron had to head out this morning to get back to the states. It was calm early on in the day and we started fishing around Devil’s Point where we picked up some dolphin in the 15 pound range. As the day went on the wind picked up to about 15 knots out of the East as we got to Columbus Point. We picked up a few more dolphin here and pulled off a wahoo, but other then that it was fairly slow.

We paddled back inside and after a long lull the right long rigger gets another dolphin. We weren’t in a sharky area so we were able to leave a few baits in the water and POP, the left long rigger clip releases and we see a solid jump from a good sized bull dolphin. The bull took a strong run with 20 pounds of heat on him! We gaffed the cow Jeff had on and went after Sid’s fish. As Joe got back on the fish, we got to the leader quick and we saw it was a good sized bull, and it seemed like it still had plenty of fight left. Surprisingly, it got just in range of my gaff, and after a shot in the head we swung it in the boat where the fish went ballistic! We all guessed it was in the mid forties, but we got back in and weighed it on the certified scale; 54.6 pounds! Awesome fish for sure, and Sid’s second amazing trophy fish of this trip. Congratulations Sid!

We ended the day with 8 dolphin. Not too bad at all, and ending on a high note was excellent! 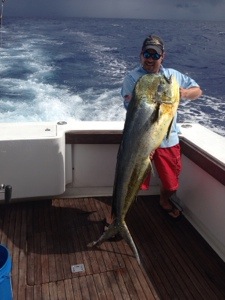