Today we got back to dredge fishing on the OverUnder. We had a nice sunny day in the 80s with winds at 10-12 knots out of the SE. We dropped the lines in at Devils Point and worked down the edge. We had a very slow start to the morning. But once we made the turn to Columbus we found a few.

We started off with a white marlin that was all over the right dredge. We got him on and Brett was on the rod for his first marlin ever. After a solid fight we got the fish to the boat for a clean release. After that we got a double header of Mahi for Brothers Will and Phill for their first dolphins, then we were covered up a few times on dolphin up to 30 pounds and the whitetip sharks were everywhere. We only had one fish eaten luckily.

After putting some dolphin in the boat we pushed back through the caves and hooked into a sailfish. Will was on for his first billfish, and he hung in there until Joe got a clean release next to the boat. We called it a day, and it was a lot of fun with a lot of “firsts” on the OverUnder today. 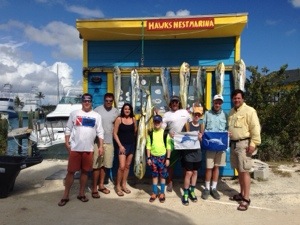