The fishing here in Cat Island remains to be pretty hot! The dolphin re definitely here thick and they are nice ones averaging in the lower twenty pound range. Seas were calm again and the fish were biting!

We started off the day between dolphin head and Devils Point and got into some action with mahi. In one of those flurries we had a sailfish sneak up on us on the turn and unfortunately we missed that one. We worked our way down to Dolphin Head and raised a blue marlin on the right mud flap dredge and in the turn a white Marlin came up on the left teaser of Squidnation electric blue squids with a Pakula/ballyhoo chaser. The white switched off to every bait in the spread and made Joe dance from rod to rod before the white finally ate the dorado Party Skirt that wasn’t in his hands be we missed that one. A customer was reeling in the head of the ballyhoo that was left and the Party Skirt and wham! A small blue marlin piled on but didn’t come right. Chaos and frustration, hahaha.

We kept working our way down after a bunch of passes on the previous bites and got down to the turn out at Columbis Point and we had a double header sailfish pop up. We managed to get a hook into one of them and got a clean release. We fired the baits back out and immediately we got a double header of nice 40# yellowfin tunas on. One was eaten by the Cat Island Tax man, but amazingly we were able to slip one by the 6 whitetip Sharks waiting for a meal.

The afternoon was slow for us overall but we did pick at some more mahi and had plenty of fun all day! 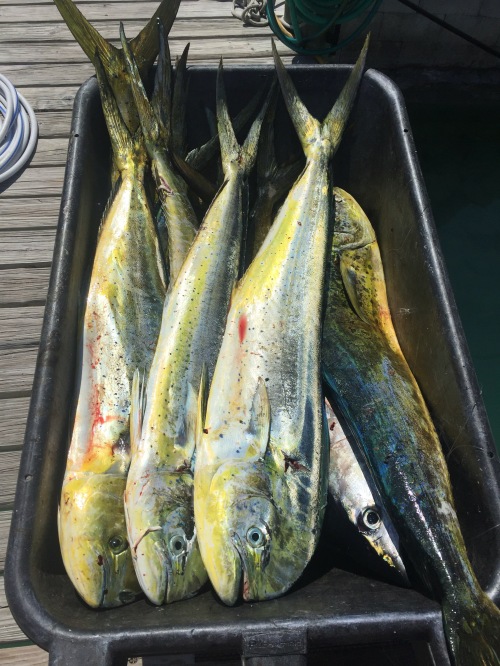