The weather has been relentless over the past month and October seems to be starting off the same. The nonstop NE winds have made it pretty lumpy offshore here in NJ, and Saturday October 1st it was looking like we were going to get shut out again with the rain and wind.  We pushed back our departure all morning until at 2:30 pm we decided to give it a go.  Getting out of TI Inlet was a bit rough and the ride was wet, but we took our time aboard Exile 65 and had no trouble getting out to the Wilmington Canyon just before dark.

Right away we found the break where the water went from 72-76 degrees and got into some excellent action with mahi on light spinning tackle and spent the last minutes of daylight catching plenty of mahi in the 3-8 pound range.  We setup at dark with the sword rods rigged with whole squid right away, and it was only a matter of minutes before we were on our first sword.  After a great fight, we managed to boat the nice swords, and the trip started off great.  Seas were definitely still rather big so it was a rocky night, but we had consistent action overnight with swords and sharks, but had some very tough breaks and lost a sword and a nice mako, but hey, that’s fishing.

We got up on the troll at first light and early on got a triple header of 25-30 pound class yellowfin tunas on Fish DownSea Tuna Flares. I was hoping maybe it would be game on trolling tunas after seeing this, but nope.  We managed to go on to catch 2 white marlin on the troll and at noon picked up and ran home.  Another great trip on Exile 65 ending with 1 swordfish, 2 white marlin releases, 3 yellowfin tuna, and 39 mahi mahi. 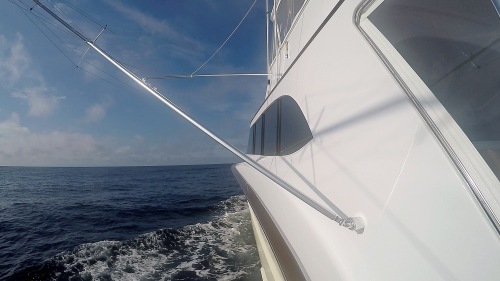