We fished Day 2 of the Mid Atlantic Tuna Tournament and started off going on the hunt for Bigeyes. We needed a bigeye to get into the money and they have been proving difficult to find lately. We ran out to 1000 fathoms of the Spencer where there have been a few catches of bigeyes in that piece of water that was 72 degrees. We got a quad of yellowfin tuna in the 30 pound range and managed to get 3/4 into the boat. It wasn’t long after that the fog rolled in thick for the remainder of the morning and we were not able to see anything which made it difficult to search for signs of fish other then what we would run over with the boat.

Around 11:00 I decided to call off the bigeye hunt in this piece of water and got run south 28 miles to the other piece of water we have been fishing looking for a larger yellowfin to get a solid stringer. We ran over the break which went from 71.5-75.5 degree very quickly. As we were setting lines out BAM! Double header white marlin on the right side. We released both white and got back up on the troll. We went on to release 2 more white marlin and hooked into a massive blue marlin that ate the Downsea Blue Tuna Flare with a large ballyhoo on the right long. The bomb hole she left made me think we had the right tuna bite we were looking for until she did a jump and showed she was a sizable blue marlin. Unfortunately once we got settled in the leader chafed off on the blue marlin’s bill.

We continued to work the break to the SSW covering both the warm and cold side and picked at a few mahi until we got into another double header of white marlin to end the day. We released 1 out of the double and pulled the hook on the other. All in all, amazing day of fishing going 5/6 on white marlin, 0/1 on blue marlin, 3/4 on yellowfin tuna, and some smaller mahi. 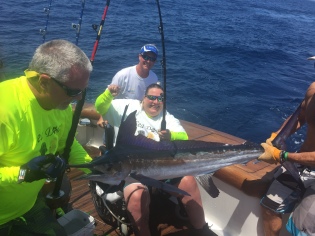